WASP OR HORNET... WHAT'S THE DIFFERENCE?

This is a topic of much confusion. The simplest way to define wasps and hornets is to say that all hornets are wasps but only some wasps are hornets. It can also be put this way: Hornets are a type of wasp not found in North America. In the United States, there is only one pest hornet. It is the European hornet (Vespa crabro). It was brought to America by European settlers in the 1800s.

There is another wasp in the U.S. that bears the name, "hornet," but it is not actually a hornet. It is the baldfaced hornet, or Dolichovespula maculata. It is not a true hornet because it has always lived here. Let's take a closer look at these wasps that bear the hornet name, as well as two others that do not. 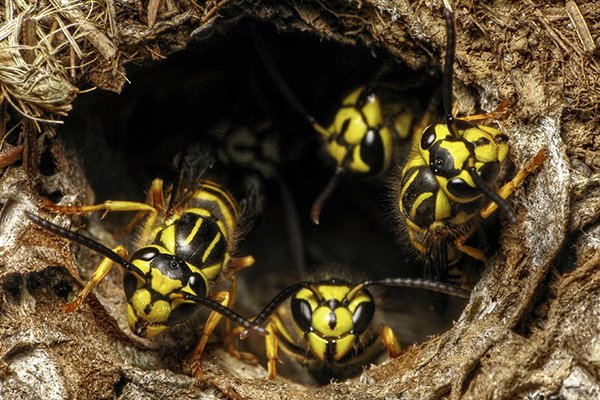 Also known the giant hornet or brown hornet, the one true hornet of North America is around 25 mm in length; that is almost an inch. As you can imagine, it can be pretty scary having a hornet infestation. These insects are brown with yellow abdominal stripes and a pale face. They build nests in hollow trees, attic spaces, porches, sheds and the wall voids of homes. Colonies can contain as many as 400 members at peak population.

These wasps range from 18 to 20 millimeters in length, while not as big as European hornets, they're still pretty big. They commonly create paper nests on tree branches and under the over hangs of buildings. Colonies may contain as many as 400 members at their peak. If baldfaced hornets create a nest on your property, be careful. They have sentries that fly around the outside of their nest. If you get too close, they're able to respond quickly and they can be very aggressive.

The paper wasps we see most often are brownish with yellow markings but paper wasps can also have the yellow and black coloration of yellow jackets, so they are sometimes mistaken for yellow jackets. You can tell the two apart by looking at the waist. Paper wasps have a slim waist and yellow jackets are fat at the waist. Paper wasps are between 16 to 20 millimeters in length. The nests they create are made of paper and can be found in above-ground locations. They can also create nests inside the voids of homes, though it is not as common. There are 22 known paper wasp species in North America and they normally live in small colonies.

This is the most aggressive wasp on our list and the most frustrating to deal with because it creates nests in the ground and these nests can be agitated by the vibration of a lawnmower. They'll also commonly create nests in the voids of homes and other man-made structures. Yellow jackets are 16 to 20 mm in length and have black and yellow coloration. If you see these wasps flying around in your yard, it is a good idea to contact a licensed pest professional as soon as possible.

While wasps are a stinging threat, they are beneficial insects. It is good to have them visit your yard. When they are away from their nests, they aren't aggressive. Even yellow jackets won't bother you as long as you don't wave your arms around quickly. They come into your yard to help with pollination and to prey on bugs. So you should let them. Problems only start when they create a nest, so early nest detection and removal are the best way to protect yourself and everyone living in your home. If you'd like assistance with this, and you live in our extensive Pennsylvania, New Jersey, or Deleware service areas, get in touch with our team. At Moyer Pest Control, we offer residential pest control plans that include coverage for wasps.

Don't wait till wasps have already attacked you or someone you care about. Request proactive wasp prevention services and enjoy the benefits of protection from other harmful pests such as mosquitoes, ticks, spiders, mice, rats, and more. Every home should have a residential pest control program; let us help you get yours in place today.