The Relationship Between Ticks & Our Pets

In our Pennsylvania and New Jersey service area, we have four primary tick threats. In this article, we're going to take a quick look at each of them and talk specifically about their ability to harm our pets. Here's what you need to know: 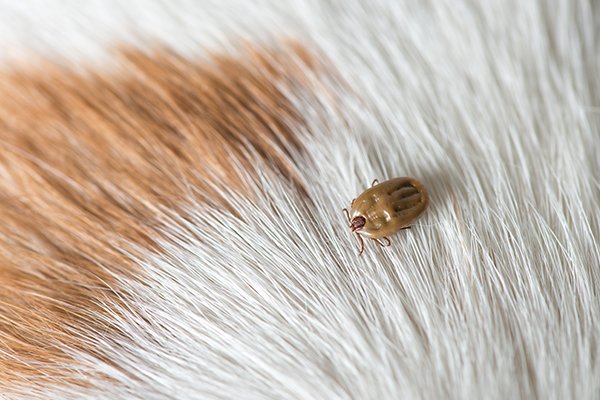 What's in a name? A lot, actually. These ticks, known scientifically as Dermacentor variabilis, have a preference for dogs. That doesn't mean they won't attach to humans. It just means that they are going to target your furry family members first. And when they do, they can transmit several diseases. The two most common diseases associated with this tick are Rocky Mountain spotted fever and tularemia, which has the ability to lead to tick paralysis.

These ticks are brown or reddish-brown with a whitish to gray coloration on their back near their head. If they have not had a blood meal, they will be 3/16 of an inch in length. After feeding, these ticks swell up to about 3/5 of an inch in size and turn a more grayish color.

You may know these ticks as deer ticks, as they are commonly called. Entomologists refer to them as Ixodes scapularis. But no matter what you choose to call them, it is important that you know that these ticks present the threat of spreading Lyme disease to you and your pets. In our pets, this sickness is more prevalent for dogs, but cats can contract it as well. And as you probably already know, this tick-borne disease is also very common in humans.  Lyme disease can produce a wide range of symptoms that can be mistaken for other diseases such as fibromyalgia, ALS, Alzheimer's, Parkinson's, and more and can cause lifelong health problems. Catching deer ticks early and extracting them properly can prevent the transmission of Lyme disease, so make sure to check yourself and your pets regularly.

These ticks are an orangish-brown color with dark brown or black colored legs. At only about 1/8 of an inch in length, these ticks are quite small. Fortunately, they balloon quite a bit when they become engorged. When checking your pets, look for large, grayish-tan colored ticks in and around their ears or between their toes as these are common tick hiding places.

Though these ticks sound like they should only be found in Texas, that is definitely not the case. The species known as Amblyomma americanum can be found from southern Texas all the way up into Massachusetts, in the south-eastern portion of the United States! The three diseases most associated with this tick species are Rocky Mountain spotted fever, tularemia, and ehrlichiosis.

These ticks are a reddish-brown color and are often identified by the tiny white dot on their backs. An unfed lone star tick will be about 1/6  to 1/4 of an inch in length. After a blood meal, these ticks become a slate-gray color and expand to about 1/2 an inch in size.

This tick species, known as Ixodes cookei, prefers to feed on groundhogs. But while they are considered host-specific, they can be found feeding on other animals, such as weasels, rats, skunks, and more. They'll also attach to humans. The primary concern with these ticks is the spread of Powassan virus (POV).

Groundhog ticks range in color from tan to reddish-tan and are about 1/8 of an inch long. Like all ticks, they become much larger when engorged and appear gray in color.

There are many diseases that can be spread by ticks. It is important to know what they are and what symptoms are associated with them. We've named the primary threats such as Lyme disease, Rocky Mountain spotted fever, tularemia, ehrlichiosis, and Powassan. A few others common diseases are hepatozoonosis, babesiosis, bartonellosis, and anaplasmosis. Oftentimes, these diseases have the word canine in front of them, such as canine babesiosis or canine bartonellosis. This is because dogs are at greater risk for tick-borne disease than cats. But cats are by no means safe. Diseases like Haemobartonellosis, cytauxzoonosis, and some of the other diseases already mentioned may be rare, but they are also extremely harmful.

If you are a pet owner, it is important that you take steps to protect your pets with veterinarian-prescribed tick-control products. Experts also suggest tick reduction services as a way to ward off tick-borne illnesses. If you need assistance with tick reduction, we can help! At Moyer Pest Control, we offer flea and tick control services that help to protect outdoor living areas and reduce ticks in the shaded places they can hide around your home.

When it comes to tick-borne diseases, it just isn't worth it to take a chance that you, your family, or your pets will become one of the thousands of victims of tick-borne disease. To protect your family and home, contact Moyer Pest Control and schedule immediate pest control services today!