If you’ve got questions about the ground beetles hanging around your Souderton home, you’re not the only one. Here’s what local residents should know about the potential harm of ground beetles, why they enter homes, and what you can do to combat them. 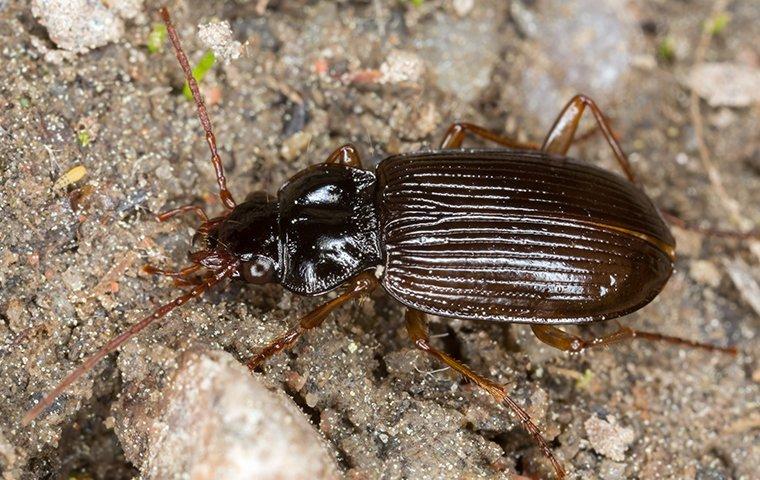 What Does A Ground Beetle Do?

One of many types of beetles, you can usually recognize ground beetles by their flat, elongated bodies and black coloring. While most ground beetles have a full set of wings, they’re unable to fly, so they get around by crawling on the ground or climbing trees and bushes.

These pests feed on everything from aphids to earthworms and slugs, and in small numbers, ground beetles can be more beneficial to the environment than harmful.

While they may be scary when they invade in large numbers, ground beetles aren’t usually considered dangerous or harmful. Unlike some critters, they don’t carry or transmit diseases, so they don’t pose a health risk to your home and family.

If they feel threatened or cornered, ground beetles do have the capacity to bite, but it’s rare to get bitten by a ground beetle. Some ground beetle species do contain a defensive liquid that they can spray to protect themselves, which may cause minor irritation to human skin.

More than anything, ground beetles are a nuisance. Even if they aren’t dangerous, getting rid of ground beetles once they’ve made it inside your home isn’t always easy, especially with large infestations.

Why Are Ground Beetles In My House?

Ground beetles prefer living outdoors and in gardens, so why do they end up in your home? A ground beetle infestation can happen for a couple of reasons. Like many insects, ground beetles are attracted to light and may venture into your home because of light from your windows or porch lights shining at night.

To get inside, ground beetles will use tiny cracks and crevices in the foundation of your home. Gaps under doorways and windows can also serve as potential entrances for these critters.

Homes that already have existing pest issues with other insects or a lot of clutter are especially attractive to ground beetles since they provide a food source and plenty of hiding spots.

How Do You Kill Ground Beetles?

While it may not be difficult to deal with one or two ground beetles on your own, these critters can become a problem if you’ve got an infestation on your hands. As difficult as they can be to control once their numbers grow, the best way to deal with ground beetles is by enlisting professional help from Moyer Pest Control.

With years of experience serving Souderton and surrounding areas as well as a complete customer satisfaction guarantee that comes with every treatment, our job isn’t done until your home is beetle-free. If you’re finding ground beetles around your Souderton home or property, there’s no reason to wait. Call us today at Moyer Pest Control to schedule an inspection or learn more about our ground beetle control services.

Moyer Pest Control received an average rating of 4.4 out of 5 stars from 42 reviews. Read Google Reviews