What To Do If Yellow Jackets Invade Your Souderton Yard

Pest control in Souderton may be your only option to deal with them safely. To learn some yellow jacket facts that will help you decide how to deal with an infestation and for advice on getting rid of yellow jackets, keep reading.

Yellow jackets are a particularly aggressive species of wasp, so yellow jacket identification includes looking for those stereotypical wasp characteristics like the “waspish” waist. Beyond that, coloration is what helps identify a yellow jacket. They have black and yellow patterns on their abdomens, often in bands, sometimes with dots. They also have long, thick, drooping antennae and small hairs on their head and thorax.

Another way you can practice yellow jacket identification at a safe distance is by understanding their habits. For example, yellow jackets are social and live in hives of thousands of workers. They are most active during late summer and early fall, and they are frequent visitors to outdoor events because of their preference for sweets and proteins. If you have a barbecue, you can probably expect yellow jackets. 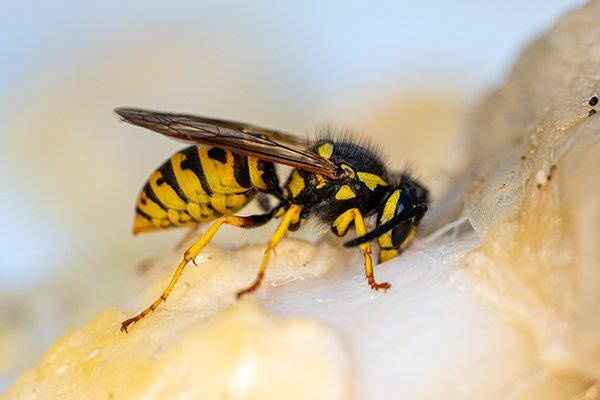 Yellow jacket nests can be found in the ground or other cavernous areas such as under eaves or inside attics. They are often found at the roots of a tree or in the crooks of its branches. These nests can be similar in appearance to a beehive if you are able to see the entirety of it. They have swirls of paper-like material that taper to a point at the bottom where you will see a hole through which the wasps enter and exit.

The bald-faced hornet’s nest looks the same or similar to other types of yellow jacket nests, but it will not build its nest in the ground, instead opting for locations at least a few feet above the ground. They prefer trees, shrubs, overhangs, and utility poles.

How To Control Yellow Jackets Around Your Yard

While prevention is the easiest form of yellow jacket control, getting rid of yellow jackets is a whole other dilemma. Now that you know all of the yellow jacket facts and characteristics, you know that dealing with an active infestation is a task best left to the professionals.

To get rid of wasps or deal with any other pest around your home, you can trust Moyer Pest Control. Not only can you choose a residential pest control plan that fits your individual needs and budget, but the pest professionals at Moyer Pest Control can help you fortify your home and yard against pests with advice and educational materials no matter which plan you choose. You shouldn’t always have to be on the defense against pests. Instead, Moyer Pest Control can teach you how to stop them before they start. Call today to schedule your inspection.