Earwigs Are The Stuff Of Legends

It has long been rumored that these creepy crawly insects will crawl into the ear of a sleeping human, burrow into the brain, and lay its eggs there. Fortunately, this is completely untrue, but it is still not a good idea to have these alien-looking creatures lurking behind your bathtub.

Though only around 6-25 mm in length (depending on the species), earwigs can be startling to encounter. An earwig also has 2 antennae, 6 legs, 3 body parts, and a set of formidable pincers at the end of its abdomen. Earwigs make up the insect order Dermaptera. Along with their forceps-like pincers, they also have a pair of membranous wings that fold underneath a pair of forewings.

Mostly nocturnal creatures, earwigs often hide inside small, moist crevices during the daytime hours and are active at night, feeding on a wide variety of plants and insects. Before becoming adults, immature earwigs go through 5 molts. Many earwig species display maternal care, which is uncommon among insects. Female earwigs may care for their eggs and even watch over nymphs after they hatch until their second molt.

Earwigs are creatures that eat mostly leaves, fruits, seedlings, vegetable plants, flowers, insects, and mold. It is their love of mold that often brings them into areas where wood has rotted. Some species of earwig feed on insects, some only feed on plants. But most feed on everything. 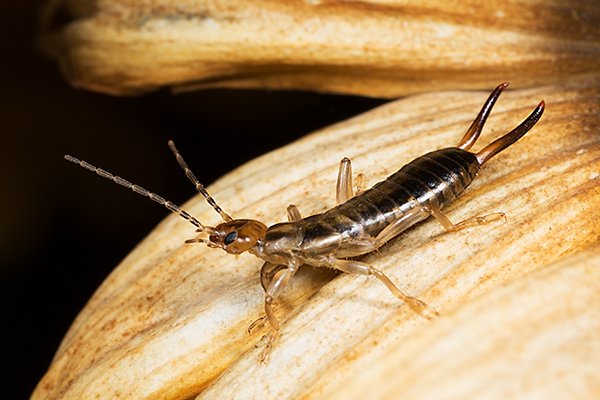 Although earwigs are harmless to humans, they can make themselves a frustrating pest when they get into flower beds, gardens and, certainly, homes. When damage to flowers, foliage, and various crops occurs, earwigs are often to blame, especially the common earwig Forficula auricularia.

Although earwigs don't bite humans, they do sometimes pinch. Though a pinch from an earwig is unlikely to break the skin, it can be painful. And if an earwig has come into contact with harmful bacteria, it could transfer that bacteria into a wound if it does manage to break the skin. Because of this, it is a good idea to apply antibacterial lotion to the puncture.

In homes, if earwigs are present, this could be a warning sign of bigger pest problems. Earwigs are unlikely to create holes to get into homes. However, if they find holes that have been made by carpenter ants, termites, or some other damaging pest, they will be more than happy to utilize those holes to gain entrance. Rodents also chew holes in homes, and earwigs will use those as well. Earwigs can be a sign that there is water damage in your home. This could be caused by a broken gutter system. And, it is important to note that wet wood is a magnet for many damaging or nuisance pests.