Is This A Yellow Jacket?

So, you've spotted what looks like a wasp or a wasp nest on your property, but how do you know it's a yellow jacket? Fortunately, a yellow jacket's appearance differs from other stinging insects quite a bit, which makes them easier to identify on sight.

These critters have segmented bodies and thin waists, a black-and-yellow pattern, six legs, and elongated wings.

Here are a few other key facts that can help you recognize the behavior of a yellow jacket when you encounter one:

Unfortunately, their aggressive behavior and swarm attacks are why yellow jackets can be incredibly dangerous to have on your property. 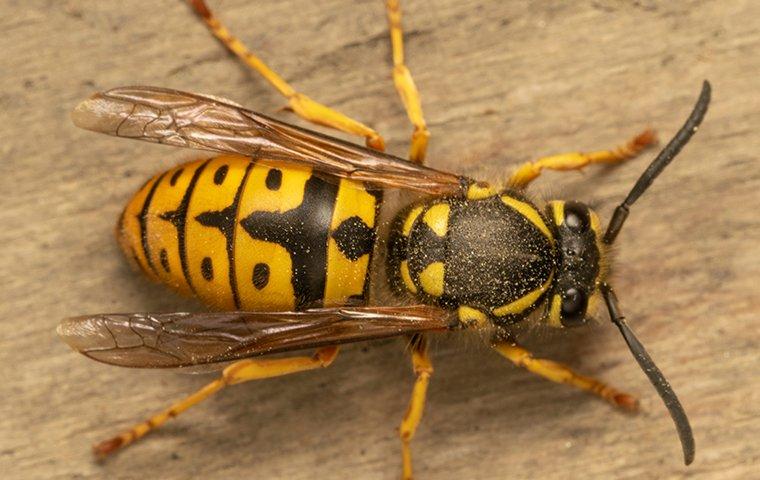 Are yellow jackets aggressive? Yes, they are. Yellow jackets aren't the friendliest pests you'll encounter and tend to be considered aggressive – even for wasps. Their lance-like stingers have tiny barbs that allow them to sting their prey as many times as they want without consequence.

Because they're aggressive defenders of their nests, stumbling upon a yellow jacket nest can quickly become dangerous for anyone. People with allergies to bee stings may have a severe reaction to yellow jacket stings, but facing a swarm of yellow jackets can become a serious health concern even if you're not allergic. Not only can they inject their venom as much as they want, but yellow jackets attack in swarms.

Yellow jackets build their nests in protected spots – like in trees, bushes, or holes in the ground – which means that many homeowners don't realize they've got a yellow jacket infestation until it's too late.

How To Get Rid Of A Yellow Jacket Nest

Given their aggressive nature, an encounter with yellow jackets can quickly go south, especially if you inadvertently run into a nest. Many homeowners may turn to insecticides or home remedies, like using boiling water, to eliminate the nest – but you won't kill every wasp, and you're likely to make yourself their next target.

If you do think your property has a yellow jacket nest, here's what you should do:

Given their aggressive nature, it's always better to be safe than sorry around yellow jackets and their nests.

If there's one pest that you don't want to ignore, it's the yellow jacket. Once they discover a yellow jacket nest on their property, some Souderton homeowners might make the mistake of attempting to deal with it on their own – but trying to handle a nest on your own is often ineffective and extremely dangerous.

Given how aggressive they are, your safest option is to leave yellow jacket control up to the professionals – like those of us at Moyer Pest Control. Our specialists not only have the training and experience to effectively rid your property of yellow jackets, but we have the gear to do it safely as well.

At Moyer Pest Control, we'll find the root of your yellow jacket problem, and then we'll put preventative measures in place to ensure these wasps don't make a reappearance. If you've discovered a yellow jacket nest on your Souderton property, or you just suspect that there may be one, don't hesitate to contact us today to learn more about our home pest control and commercial pest control services.